SFMTA Officially Says Taxis Can Pick Up And Drop Off In Bike Lanes! By John Han.

It's been more than a year in the making.

The San Francisco Municipal Transportation Agency (SFMTA) will be issuing bumper stickers to all of the City's taxicabs, indicating that taxis may legally pick up and drop off public riders in bike lanes, and should not be ticketed.

The agency put out a memo dated October 18, 2011 instructing all of San Francisco's taxi companies to notify their drivers about the plan.

The memo, signed by Deputy Director of Taxis Services Christiane Hayashi, says not only will the SFMTA issue the bumper stickers, but it has also issued "guidance" to the Parking Control Officers (PCO's) instructing them not to ticket taxi drivers who are actively loading or unloading in bike lanes.

In 2010, taxis (mainly day drivers) were grossly targeted by the PCO's along main boulevards such as the Embarcadero (in front of the Ferry Building) and along downtown areas of Market St.  Both of those boulevards have bike lanes, with Market St. having what is known as a "separated" lane.

Unusually high volumes of $90 and $100 tickets were being issued by the PCO's last year when cab drivers would pull into bike lanes long enough to either load or unload passengers.  Most of these tickets were mailed in to the cab companies, meaning that the drivers did not know they had been ticketed.  A month or so later, a company cashier would hand them the envelopes with the high priced tickets inside.

Cab companies said that the mail in tickets posed an administrative problem.  And while drivers considered those tickets to be unfair, many were unsuccessful in getting them dismissed and wound up paying them.

To highlight it, the bulletin says that taxis may use non-separated bike lanes, as a last resort, to drop off all passengers, including disabled or non-disabled passengers.  (My hope is the SFMTA actually means to say taxi drivers may both pick up and drop off in non-separated bike lanes, although when you look at it, technically, the bulletin only says that taxi drivers may drop off.  A typo?)

For separated bike lanes, taxis may only enter for disabled and elderly riders. 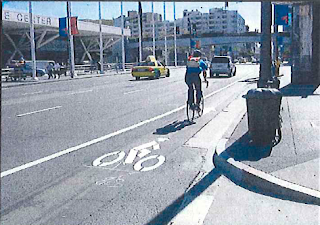 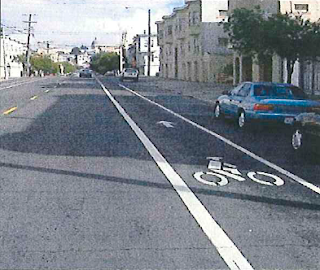 (Images from SFMTA's memo)
Here is an example of a separated bike lane. 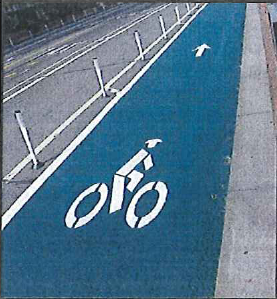