SFMTA Listens To Taxi Drivers... For Now. By John Han 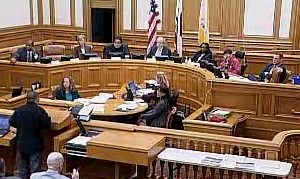 The San Francisco Municipal Transportation Agency (SFMTA) said Tuesday, that it will discuss further the concern amongst drivers, over cab companies passing 5% credit card fees onto taxi drivers, and driver privacy rights surrounding the implementation of electronic waybills.
At its April 5 full Board meeting, an estimate of 50-60 cab drivers made the presence felt during general public comment, some of them filling the overflow room.
San Francisco taxi driver Tariq Mehmood was amongst the first to deliver an outcry, saying MTA and Taxi Services Division had failed to inform the vast majority of taxi workers adequately about implementations of the new policies.
“I have come to speak on my behalf and all the little people, the taxi drivers!” Mehmood exclaimed, to the applause of the drivers.  “Last time when you passed the rules about electronic waybills they were unaware [of] what’s going on in the back, because the Taxi Director never published it properly to let all the people know.”  More applause.
In an equally impassioned plea, Mark Gruberg of the United Taxi Workers and Co-Founder of Green Cab, said cab companies like Yellow have succeeded in convincing the MTA to authorize company profits from the credit card fees, fees that are soon to be passed through to drivers.
Current regulations prohibit cab companies from charging back their drivers for credit card transactions.  However, citing rising costs from the increases in credit card use, MTA had fairly recently authorized a waiver to the cab companies, thus allowing now up to 5% charge backs to drivers for all credit card transactions.  It is a pass through.  As part of the deal, companies must be able to produce electronic waybills for the MTA that can pinpoint locations, trip information, and details about fares about all drivers.
But Gruberg says companies like Yellow are not using the new waiver simply to recover its costs.
“Yellow is working through a company called Yellow Credit Services Inc.”, Gruberg said.
“I have it on good authority that they are getting a kickback from that company.  They are exploiting their drivers!  The thing has been turned completely inside out.  Not only do they not have to pay anything, but they are actually making a profit off their drivers’ processing of credit cards, and that is this agency’s doing and nobody else!”
MTA’s cap on the 5% charge backs is allegedly tied with a successful, and politically influential lobbying effort, able to sway City Hall to allow rear seat “Taxi Tvs” in all the City’s cabs, like in New York.  The Tvs are said to display video advertisements to all passengers in the back seat every time a driver turns on the meter.  Yellow Cab says it expects to have the Tvs installed in all of its cabs by April 15, 2011.  According to other reports, Luxor Cab will meet a similar or same deadline.
Mary McGuire, a medallion holder and past member of the Taxi Commission, questioned the directors at Tuesday’s meeting as to why the Board had not publicly discussed credit card fees before, seeing how the policies are now a done deal.  She stressed that not only would electronic waybills invade drivers’ privacy, but credit card processing would intrude as well, possibly more.
“My day driver called to check his balance with Verifone, it’s a firm called Load-N-Go.” McGuire said.  “And a woman answered, and he said it sounded like she was in her kitchen making dinner.  I find that weird… is she working from home?  Do you really want to give your social security number to… to who?”
McGuire also urged that MTA first conduct a study to determine what health effects could impact drivers exposed to excessive periods of low-level radiation from the Tvs.
The Board responded.
Director Malcolm Heinicke said that although cabs accepting credit card payments is a good thing and mustn’t change, he said he was left with more questions than answers about how to implement them after listening to the drivers.
“I’ve heard the drivers.”  Heinicke said.  It seems like an issue where something isn’t quite working from my perspective.”  He recommended that the Taxi Advisory Council should revisit the policies.
“If the determination is made that the 5% is going to be borne by the driver for whatever reason, and I’m not saying we’ve made that decision, then that may be a factor in favor of a fare increase”, he added.
The Board’s main advocate for disabled people, Director Bruce Oka, acknowledged the lack of true and fair voice of the 7500 or so taxi workers is a problem in the City.
“Something we are doing is going haywire.  I want to know what it is that’s causing all these drivers to be almost at the point of explosion.  No matter what we do with the make up of our Taxi Advisory Council, taxi drivers are not going to be fairly represented because there are 7500 cab drivers in the City”, he said.
“How the heck do we give fair representation of that number on a Taxi Advisory Council?”

The SFMTA said it will schedule a full public hearing on the matters but no date has been set.
Posted by SF Taxi Media at Sunday, April 10, 2011